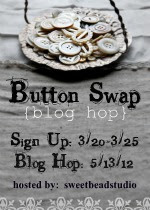 I am always happy to get some unsolicited inspiration. I received an email from a friend who was looking for a piece of jewelry with wings in it. She needs to buy a gift for a friend that is a pilot.
Well, of course I have some wing components in my stash!! I was only hoarding them, but it's time to let them go!
Actually, this first one is not that old. I just got it last month, from Erin Prais-Hintz. It was from the simple truths sampler club. It's actually perfect for my friend's friend. I put it on a fairly substantial chain, because the pendant is substantial. It's about 1.5" square, and has a nice weight to it. I added the extra wing at the clasp, which can be worn in the back, or on the side. Simple, but the pendant is the star of this one! 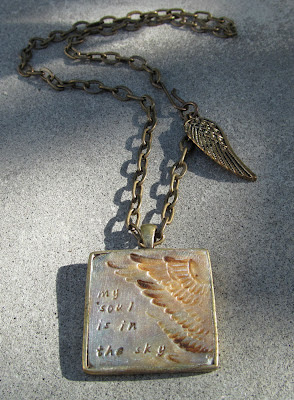 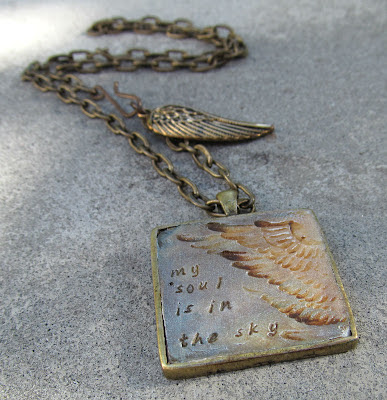 The next wings I found were from Earthenwood. I actually bought them somewhere else, on sale. So I bought all 3 colors available.
First, the white wing. I used some black and white polymer beads and an acrylic bead, along with some cool bead caps, hematite small rounds, and grey matte glass pony beads.

Next up is the green wing. I used the same bead caps as above (I just got them and I hadn't used them before) with some faceted fire agate beads. 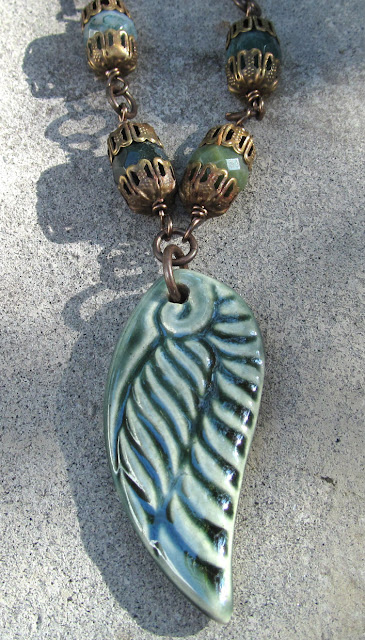 And lastly, the rust wing. I decided to use the lone copper filigree bead that was hanging out on the desk. I went through my copper stuff, and found the fire patina'ed curved tubes. They look so pretty in the baggie together, but it's really hard to pick out just one! But I finally picked this one. Then I picked a pretty clasp - I think it goes with the filigree bead. 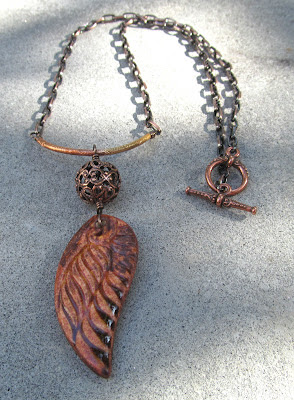 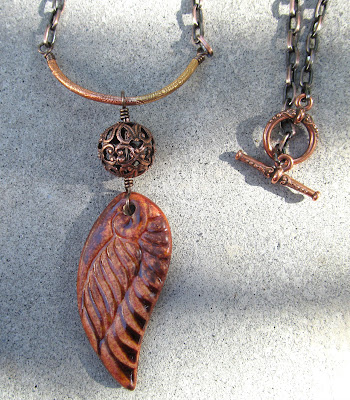 And, just because I was on a roll, I picked up this mother of pearl butterfly that has also been languishing on my bead desk. Picked out an enameled bead and flower to match. I thought I had made the necklace all lop-sided, because the butterfly doesn't hang straight. That's always the challenge doing asymmetrical designs. But after I switched things around, and it still hangs wonky. I think the thickness of the shell is uneven, so one side is thicher/heavier. Either that, or the hole is not in the center. Either way, I'm probably stuck with this one for a while!
Still, it's pretty. 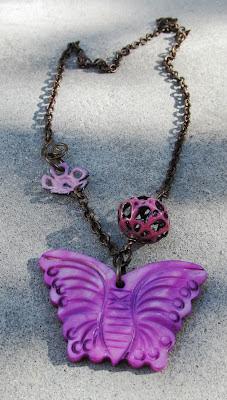 ﻿﻿ ﻿﻿I sent the wing photos to my freind - she liked all of them, but she's buying the simple truth pendant - it really is the perfect necklace for a pilot!